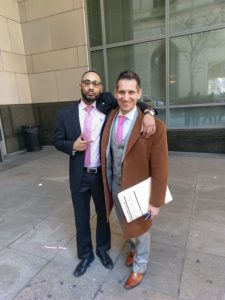 Our firm obviously wants to obtain great results for our clients but we also want our readers to understand how we obtained these results at trial. Remember, our law firm, unlike most, discusses our wins and our losses. The learning from these victories and losses never stops and it’s our hope that you find our latest win interesting and valuable possibly to your own case.   Read some of our client reviews to hear about our other cases.

On Monday, March 19, 2017, a Philadelphia jury of 8 men and 4 women acquitted our client (BJ) on 3 counts of Attempted Murder and 3 counts of Aggravated Assault following a three day jury trial at the Criminal Justice Center. Our client, the son of a former Philadelphia police officer, was charged with these crimes following an incident outside of his home in which he fired his Glock handgun at a car that was moving toward him on the street outside of his home. The incident began with an argument between our client and his then girlfriend, which ended with her leaving his home but threatening to return with people who planned on physically assaulting him. Our client’s ex-girlfriend made the threat after he refused to give her money for an alleged abortion. BJ didn’t believe that he was the father of the child and had asked this woman to leave his home following this paternity allegation.

While this woman left the apartment, minutes later an unknown person (possibly his girlfriend’s sisters’ boyfriend) smashed BJ’s car windshield that was parked outside the home. After hearing the sound of breaking glass, he retrieved his gun (Glock), which he had a permit to carry, and left his house to investigate what was happening. As BJ descended the steps and began walking to the rear of the property, he was immediately met with a running car in the middle of the street. He had never seen this car before and as he attempted to identify the driver, the car sped toward him. BJ fired three shots; one through the headlight, one through the windshield, and one through the rear driver side panel. The driver, later identified as our client’s girlfriends’ sister, drove off but struck a fire hydrant on the street prior to exiting onto Roosevelt Boulevard in Northeast Philadelphia.

In the car at the time of the shooting were our client’s girlfriend, her young daughter, and her sister (the driver). These women went to police and identified BJ as the shooter. Philadelphia Police later arrested him on the street nearby his house and recovered the firearm underneath a dumpster across the street from the home. Following the preliminary hearing, a Philadelphia Municipal Court judge held BJ on all charges and set bail at $450,000, which our client posted. Read my article on preliminary hearings to understanding the difference between this type of proceeding and a trial.

At trial, our defense focused on a self-defense argument, where we successfully persuaded the jury that our client was in fear of serious bodily injury or death at the time he fired his weapon. The prosecution presented the testimony of two victims, a ballistics expert, as well as the police officers involved with the arrest and recovery of the firearm. It is important to keep in mind that once a self-defense argument is asserted at trial, the prosecution must establish beyond a reasonable doubt that the defendant did not reasonably believe that his life was in danger or that he was in danger of serious bodily injury. This is an incredibly effective argument to use at a jury trial.

While BJ did an excellent job testifying at trial, the victim’s very poor testimony on cross examination, proved to be a critical point in this case. Specifically, the alleged victim gave inconsistent statements during their testimony. Our defense was able to present two character witnesses for our client which allowed us to obtain a key jury instruction regarding character evidence in the case. Read my article on good character for more information on this topic.

Other important factors included poor lighting conditions at the time the incident occurred which bolstered our defense argument that BJ couldn’t identify who was in the car and what they planned on doing if he did not react. While the plea deal from the prosecution in this case was 6-12 years in a state prison, our client would have more than likely received a substantially higher sentence if he was convicted following a trial.  The jury took the weekend to decide the case but came back with the not guilty verdict late Monday morning.