Methamphetamine: Its Forms, Effects and Criminal Charges in Pennsylvania 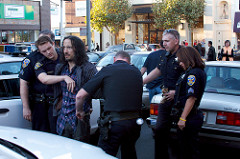 Methamphetamine (aka Meth) is a stimulant which is actually FDA approved under the brand named medication Desoxyn. Meth is a highly addictive drug which can be taken in pill form, smoked, or injected in its powdered form. Smoking this drug produces a “rush.” Oral injection or snorting, however, produces a long lasting high instead of a rush which reportedly can last as long as a half a day. Chronic meth users can exhibit violent behaviors, anxiety, confusion, insomnia, or other forms of paranoia.

Distribution of methamphetamine in Pennsylvania is still a felony which is much more serious than a misdemeanor. The criminal defense to a methamphetamine charges must focus on actual and constructive possession as well as downgrading felony charges to misdemeanor charges. It is also important that your attorney focus on pre-trial Motion to Suppress evidence against you based on a violation of your Fourth Amendment Rights and your rights under the Pennsylvania Constitution (Article 1, Section 8).

While often disregarded, the form of Methamphetamine is also an important part of your criminal defense. Your attorney can sometimes argue that a certain form is more conducive to personal use rather than the sale or distribution of the drug. These are important argument and may keep you from serving a long state prison sentence. If you are charge with the sale or distribution of Methamphetamine, Cocaine, Crack, Heroin or any other Controlled Substance, call our office! I also encourage you to read my book, subscribe to my monthly newsletter, and watch my videos.

Drug Convictions and Driver License Suspensions in New Jersey Simple Drug Possession and Possession With the Intent to Deliver (PWID): The Prosecutions Burden