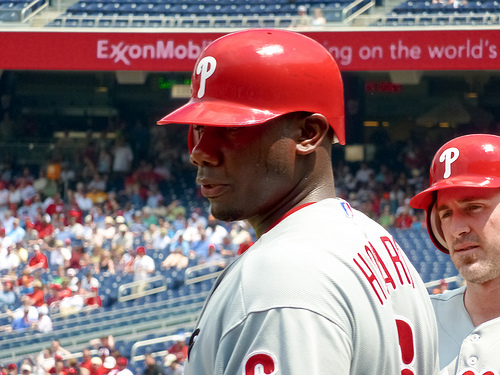 Philadelphia Phillies baseball player and former MVP, Ryan Howard, made the news recently as the victim of an incident involving a person throwing a bottle at him from the stands at Citizens Bank Park. While the bottle didn’t hit Howard and allegedly landed at his feet, Philadelphia police and the Phillies continue to investigate and search for the alleged bottle thrower. Police, right now, are classifying the incident as a disorderly conduct but this situation presents a good opportunity for me to explain the various criminal charges that could apply to the situation that occurred at Citizen’s Bank Park.

Before discussing the different types of criminal charges and the degrees of the offenses its important to understand that a person doesn’t have to make actual physical contact with a victim to be charged criminally. In Pennsylvania, like many jurisdictions, the attempt to harm, in and of itself, is enough to support criminal charges and a conviction which requires the prosecution to establish each and every element of the offense beyond a reasonable doubt.

In the case involving Ryan Howard, I believe that the Philadelphia District Attorney’s Office could potentially prosecute this person on more than just disorderly conduct which is a summary offense in Pennsylvania. There’s enough evidence to support a simple assault charge, a misdemeanor, but probably not an aggravated assault charge, a felony in the Commonwealth. When assault is charged the prosecution doesn’t have to prove actual contact with a victim but only an attempt to cause contact intentionally, knowingly, or recklessly. In the case involving Howard, the bottle thrower could be charged with simple assault, a misdemeanor of the second degree.

The prosecution would still, however, have to produce a witness who would have to testify that he or she saw this person throw the bottle at Howard. Bodily injury in Pennsylvania is defined as the impairment of a physical condition or substantial pain whereas serious bodily injury is defined as a bodily injury which creates a substantial risk of death or which causes serious, permanent disfigurement, protracted loss or impairment function of any bodily member or organ.

Given these definitions, it’s pretty clear that this loss bottle thrower wouldn’t be charged with aggravated assault because it would be difficult, if not impossible, to prove that he attempted to cause serious bodily injury under circumstances “manifesting in extreme indifference to the value of Ryan Howard’s life”. Aggravated assault is also committed in Pennsylvania if the prosecution can establish that a person intended to commit bodily injury with a deadly weapon. In this situation, it would be very hard for the prosecution to establish that this bottle was a deadly weapon because there is no evidence that there was anything more than a plastic bottle thrown in the direction of Howard.

It is also important to remember that Howard’s knowledge that a bottle was thrown at him is irrelevant to these criminal charges. In Pennsylvania, the victim’s state of mind is not an element of either simple or aggravated assault. Unlike the charge of Recklessly Endangering Another Person (REAP), the prosecution doesn’t have to prove that the conduct placed another person in danger of death or serious bodily injury.

REAP is a misdemeanor of the second degree in Pennsylvania and it’s committed when the prosecution establishes that a person recklessly engages in a conduct which places or may place another person in danger of death or serious bodily injury. Given the elements of this offense, the bottle thrower wouldn’t probably face these charges because Howard admitted in the statements that he didn’t even see the bottle thrown at him but only saw it at his feet. Further, Howard never stated that he was afraid of being hit by the bottle or that somehow he had to duck out of the way to avoid contact.

Finally, the least serious charge that could apply to this case would be disorderly conduct which is a misdemeanor of the 3rd degree in some cases but normally graded as a summary offense. Disorderly conduct is only a misdemeanor of the third degree if the prosecution can establish that the actor intended to cause substantial harm or serious inconvenience which may be difficult to prove here. At the very most, it appears that the bottle may have slightly delayed the game because it had to be retrieved before the game could resume. More than likely, however, this bottle thrower created a situation that was more of a public inconvenience or annoyance and so the prosecution would only be able to establish a summary offense.

In closing the bottle thrower remains at large but if he is arrested, it will be interesting how far the case goes in the court system. For more information about criminal charges I encourage you to read my monthly newsletter, my books, or watch my videos.