What To Expect During Deadly Weapon Sentencing

A person convicted of an illegal gun or weapons charge faces a possible state prison sentence even if the person has no prior criminal history. When a crime involves a weapon which is not necessarily a gun, district attorneys often ask the court to impose a deadly weapon enhancement. 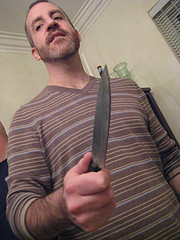 The deadly weapon enhancement allows the judge to consider a harsher sentence then what the person would have received under the standard sentencing guidelines in Pennsylvania. While a gun, loaded or unloaded, is considered a deadly weapon in Pennsylvania, District Attorneys and prosecutors often attempt to include other weapons within this category. Pennsylvania defines a deadly weapon as any device, implement, or instrumentality designed as a weapon or capable of producing death or serious bodily injury. These would include knives, BB guns, baseball bats, cars, and tire irons. The court must consider whether the offender intended to use the weapon to threaten or injure another person.

Even if the court, however, determines that the person didn’t intend on using the weapon there is still a weapons enhancement for the mere possession of it. This, however, is not nearly as serious as use. While some crimes permit the court to impose this sentencing enhancement there are specific crimes in Pennsylvania which don’t qualify for the deadly weapons enhancement. These crimes include:

The court cannot refuse to apply the guidelines and a higher court, on a prosecution appeal, can actually overturn a sentence that is too lenient. While many of the mandatory minimum drug and gun crime offenses are no longer constitutional in Pennsylvania, there are a number of violent felonies which still carry mandatory minimum sentences (i.e.: three strike law). In addition to mandatory minimum sentences for violent felonies there are also sentencing enhancements for criminal gang activity which permits a court to add twelve (12) months to the lower limit and twelve (12) months to the upper limit of a standard sentence for any crime which falls within this category.