Our criminal defense law firm spends a lot of time on the topic of illegal search and seizure along with the admissibility of evidence following a search. It’s important not to forget that police are only permitted to stop and frisk an individual when they have reasonable suspicion to believe that a crime is occurring and that the officer’s safety is in jeopardy. It’s important to keep in mind that this is a two part test and while, one part of the test satisfies the constitutionality of the stop, a police officer is only permitted to frisk a suspect if the second part is satisfied. 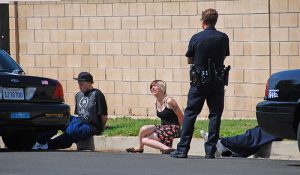 The United States Supreme Court case of Terry v. Ohio is the most often cited decision in this area. The law that came out of that case basically says that a police officer must point to a specific and articulable fact which warrants the initial stop. This standard is met if the police officer observes unusual and suspicious conduct on the part of the individual which leads him to believe that criminal activity is occurring. Keep in mind that this can’t be an unsupported suspicion or hunch. If this first part is satisfied, the police officer may only frisk a suspect if the officer reasonably believes that his safety is in danger. Again, similar to the first part of the test, this must be based on a specific and articulable fact and not an unsupported hunch or suspicion.

It’s important to never underestimate the 2 parts to this test because there are situations where police officers will ignore the first part and initially stop a suspect without any reasonable suspicion. During this illegal stop, the suspect may make a movement like reaching into his pocket, which causes the officer to reach for his gun or in some other way restrain the suspect for the purposes of a search of his person. In this scenario, since the officer failed to satisfy the first part, the frisk is illegal even if the object that the individual grabbed or was attempting to grab was some type of contraband, like an illegal drug or a gun or firearm.

Reasonable Suspicion vs. Probable Cause

When it comes to vehicle searches, unlike pedestrian searches, the Pennsylvania Constitution, following the case of Commonwealth v. Gary, is no longer considered more protective than the Fourth Amendment. This basically means that the federal automobile exception now applies to Pennsylvania. This exception states that the inherent mobility  of a car equals exigency and therefore no search warrant is required if police have probable cause to believe that a car contains evidence of a crime, they can search the entire car and any containers within the car, including those that belong to passengers. Keep in mind however, the Gary decision does not permit police to search a totally disabled car or a container within that care unless there is probable cause that the car contains some evidence of a crime. If the car is towed, an inventory search would probably let the officer search the car anyway.

While Pennsylvania now provides less protection with regards to vehicle searches following the Commonwealth v. Gary decision, there are a number of pedestrian stop situations in which Pennsylvania provides a higher lever of constitutional protection than US Constitution. The most common are the following: