Recently Alabama Defensive lineman, Da’ Shawn Hand, was arrested for driving under the influence (DUI) in Tuscaloosa, AL, just days before the start of football training camp.  While ESPN’s Paul Finebaum has already determined that this young man is guilty, my analysis focuses on the true elements of this criminal offense and his legal rights under the law rather some non attorney sports writer’s “street knowledge” opinion made without any legal foundation other some bare allegations! 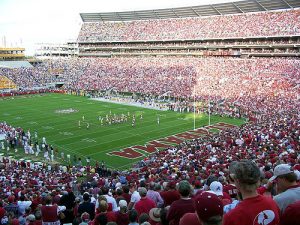 Right now, we know that he was arrested while allegedly asleep at the wheel.  While its assumed that he had alcohol in his system, we don’t have the results of the chemical test or even know if he submitted to an actual test (blood or breath).  Alabama, like Pennsylvania, maintains a tiered DUI statute.  This basically means that the severity of the DUI penalties increase according to how much a person’s Blood Alcohol Concentration (BAC) exceeded the legal limit of .08.  While Alabama, like our Commonwealth, still has a separate criminal penalty for DUI refusal, the Birchfield Supreme Court decision, has called into question the constitutionality of those DUI refusal statutes.  While some state courts have ruled that a driver’s consent or some other exigent circumstance is an exception to a warrant requirement, other courts have ruled that a person can’t consent to something that is per se unconstitutional.

The prosecution doesn’t need the results of chemical tests to prove DUI.

While obviously the results of chemical test and or a refusal are relevant to D’Shawn Hand’s case, Alabama, like Pennsylvania, maintains a general impairment DUI statute.  This means the prosecutor in his case doesn’t need to establish a specific BAC level to prove him guilty beyond a reasonable doubt.  A general impairment DUI only requires that the prosecution prove that the driver was in actual physical control of the vehicle and incapable of operating a vehicle safely due to intoxication from alcohol or drugs.  Similar to Pennsylvania, actual physical control of a car in Alabama means that the driver is seated in it and the keys are in the ignition.  This is perhaps the reason why some across the country have already passed their own judgment on this incident.

It’s important to keep in mind that Hand’s attorney can still challenge all of this evidence at the pre-trial and trial levels.

At the pre-trial level his attorney’s could question police’s reasonable suspicion for the traffic stop—basically what drew their attention to his car.  Remember that while police may not necessarily need probable cause to initiate a vehicle stop for a suspected DUI driver, they at least need reasonable suspicion, a lesser form of probable cause.   This would all be done with a motion to suppress evidence!  At the trial level, the attorneys should focus their argument on the actual physical control elements.  The position of the car (parked) could possibly create reasonable doubt as could the officer’s observation of the keys.  Basically,m if the officers simply found him in the car sleeping and the keys weren’t in the ignition and the car was parked, they may not have enough for a conviction or to even survive a pre-trial motion to suppress evidence.

Like Pennsylvania, drunk driving is a criminal offense in Alabama unlike in New Jersey where it is a non-criminal traffic offense.  While a first time offender general impairment DUI in Pennsylvania doesn’t carry a license suspension, there is a mandatory 90 day license suspension in Alabama in additional to court costs and fines.  The severity of DUI increases with a person’s BAC level.  For more information on DUI in Pennsylvania and New Jersey, I encourage you to visit my free download section and also keep reading this blog.

Is Consent an Exception to a DUI Blood Warrant Requirement? Jersey’s Graves Safety Valve keeps man from jail for a gun