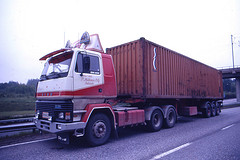 Commercial driver licensees (CDL) are men and woman who possess a special driver’s license which allows them to operate commercial trucks, school busses, passenger busses, and dump trucks. A commercial vehicle is defined as any vehicle with a gross weight of 26,001 or more pounds or a vehicle designed to transport more than 16 passengers including the driver. It also includes school bus transporting minors, and any vehicle that transports hazardous materials.

To obtain a CDL, a driver must pass a written test just to obtain a permit. After getting the permit, the driver must complete a training program and pass a CDL road-test. Because of this specialized training Pennsylvania, like other states such as New Jersey, holds these men and woman to a higher standard. This higher standard subjects them to harsher penalties for traffic violations and vehicle related crimes such as driving under the influence (DUI) also know as drunk driving.

1. Section 1612 of the Pennsylvania Vehicle Code (Title 75) prohibits a driver from operating a commercial vehicle with any alcohol in his system. If a driver violates this section it’s a summary offense.

3. A CDL holder convicted of two or more “serious” traffic offenses including the acceptance of an ARD on a DUI charge will lose his CDL for life! This lifetime suspension is out of the control of any courts and PennDOT is the final authority in these matters. This means that a CDL holder can’t appeal a permanent disqualification to a court on the basis that it’s unfair or preventing him from earning a living. A CDL is a privilege, not a right.

4. PennDOT isn’t required to advise a CDL holder that his or her license will be suspended even if their case results in an ARD disposition. The courts in Pennsylvania have found that there is no Due Process issue. This means that a CDL suspension isn’t violating any of your constitutional rights because, again, driving is a privilege and not a right in Pennsylvania!

If you have questions about DUI I encourage you to read my book, “5 Ways to Fight Win Your Pennsylvania DUI Case.”