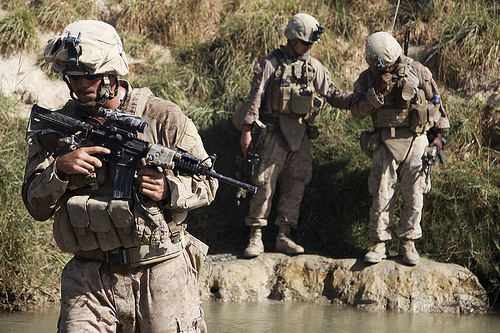 Frequently clients, friends, and family ask me about military service for those who have been arrested, charged, and even convicted of misdemeanor and felony crimes. Before discussing this topic, it is important to understand that military service is never an alternative to any criminal charge or ever offered as a condition in exchange for withdrawing prosecution at the state or federal level. While there are stories that in the past judges offered individuals the choice between military service or jail, this is simply neither the law nor any type of accepted policy of any military service branch.

The Armed Forces (Army, Navy, Air Force, Coastguard, and Marine Corps) all grant “moral character” enlistment waivers on a case-by-case basis. This means that while there are certain offenses and crimes which are not able to be waived, there are a number of non-traffic, misdemeanor, and felony offenses which still permit a person to serve their country honorably. Please keep in mind that, if you have a criminal record, even if it is later expunged or sealed, you must disclose it to your recruiter. Failure to disclose any type of record can cause a serious problem if you are later accepted into a branch of service, where it is discovered that you lied or deceived the recruiting process. Fraudulent enlistment is actually a crime under the Uniform Code of Military Justice. This will not only result in your removal from the service but also possible jail time in a military prison.

The Importance of Being Honest About Your Past

If you have any type of criminal record it’s always important to be open and up front about it. All branches of the military will want to know the “who, what, when, where, and why” of the offense. If you have a record, the decision to grant a waiver will also be based on the number of letters of recommendation that you present speaking of your character or suitability for enlistment. These letters should come from responsible community leaders, school officials, ministers, and law enforcement officials. If possible, a letter of recommendation from the sentencing judge who handled your case, or even the prosecutor (Assistant District Attorney), will all carry substantial weight during the waiver review process. Remember that all branches of the Armed Forces treat any type of contact with the Justice System as a potential issue and I can’t emphasize enough the importance of disclosing it. All branches of service will run a criminal record check on an applicant, which may include a search of the FBI database. This database will identify a crime even if it was later expunged.

People often ask if an offense or crime that was later expunged “counts” for the purpose of a military enlistment; the quick answer is that one should disclose any contact with the federal, state and local authorities even if it was an arrest that was dropped or withdrawn for lack of evidence. This may seem unfair because a person is presumed innocent until proven guilty beyond a reasonable doubt but military service isn’t a right but a privilege. No service branch is obligated to accept an applicant. While one branch may accept someone whom a previous branch rejected, no person is entitled to serve in the Armed Forces

What determines if a waiver is granted?

Waivers are granted on a case by case basis and in addition to the type of offense, the service branch will also consider your initiative and other qualifications, including the applicant’s ASVAB score along with his or her requested occupation within the service.

The following is a list of crime categories that would require a specific authority for a moral enlistment waiver:

Remember, just because an offense is waiveable doesn’t mean that a person will be granted a waiver into military service. For more information on this subject give our office a call