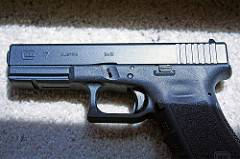 Most people understand that gun or firearm charges are extremely serious and these crimes can result in felony convictions. Gun crimes in Pennsylvania are usually based on violations of section 6105, 6106, and 6110.2 (VUFA) all of which are felony offenses in the Commonwealth. If you are charged with a gun crime in Pennsylvania it is important that your attorney focus on these 5 areas:

1. Use the preliminary hearing to obtain information to support pre-trial motions and trial defenses.

Most illegal gun and firearm cases will make it past the preliminary hearing level and so a defense win doesn’t necessarily mean getting the charges dismissed. As long as the Commonwealth produces a witness who testifies that the accused had a weapon a judge will normally find that there is enough evidence to proceed to trial. Remember there is much lower evidentiary standard at a preliminary hearing than at a criminal trial. With that said, however, your attorney shouldn’t blow off the preliminary hearing but use it as an opportunity to collect information to support pre-trial motions such as motions to suppress evidence and motions to attack the probable cause basis for the search warrant. In addition, your attorney can use the opportunity to collect information about potential trial issues such as constructive and actual possession.

2. Attack the credibility of eyewitnesses and confidential informants before and at trial.

While the credibility of eyewitnesses and informants is not an issue that your criminal defense attorney can explore during a preliminary hearing, he can make an issue of it at trial and during pre-trial motions. If confidential informants are used to prosecute your case your attorney can file a motion forcing the prosecution to produce the confidential informant. If your criminal defense attorney doesn’t file this motion the District Attorney doesn’t need to reveal the source whom provided the information which led to your arrest and now your possible felony conviction. Pennsylvania protects individuals who provide law enforcement or police with information leading to investigations. The prosecution, however, isn’t permitted to keep the identity of these individuals confidential without justification.

When witnesses are produced at trial (confidential or not) it’s important that your attorney explore their background to determine if there are potential credibility issues. Pennsylvania, like all other states such as New Jersey and the federal court system permit either the prosecution or the defense to impeach the credibility of a witness. It is important to understand that there are different rules of evidence pertaining to a witness’s character and credibility. There is, however, an overlap between the issue of character and credibility. While character may or may not be an issue at a trial depending on if it is introduced during the course of a trial, the credibility of a witness is always an issue. This is an extremely confusing topic even for some attorneys and far beyond the scoop of this short article. Please read my other article on this topic.

3. Attack a prosecution theory based on constructive possession at trial.

The prosecution theory based on constructive possession is a prime target for a criminal defense attorney. Constructive possession means that the prosecution will argue that the gun or firearm in question was found in a person’s area of “immediate control” rather than on their person. In these situations it’s important that your criminal defense lawyer focus on other people in the area and who actually owned the property in question. In addition, your attorney also wants point out other persons who also had access to the property. All of these issues can create reasonable doubt in the eyes of a judge or jury which can result in an acquittal (not guilty). I have written previous articles on actual versus constructive possession and I encourage you to read them. You may also want to watch my video on this issue.

4. Challenge the reasonable suspicion and/or probable cause for the police stop.

5. Challenge the reasonable suspicion and/or probable cause for the search.

Motions to Suppress Evidence are based on a lack of reasonable suspicion and/or probable cause to stop and/or search an individual and his belongings. Probable cause is usually the basis for most Motions to Suppress Evidence and if successful a court will prohibit the admission of often incriminating evidence which would usually lead to a criminal conviction. This is known as the exclusionary rule. Police aren’t permitted to stop or search someone or their belongings without probable cause. Probable cause is a reasonable belief that a crime has occurred, is occurring, or will occur based on a police officer’s experience and training. Any criminal defense attorney who does not explore probable cause with you and attack it is simply wasting your time and your money.

There are many misunderstood concepts in criminal defense. If you would like to learn more about these concepts read Commonwealth v. You.