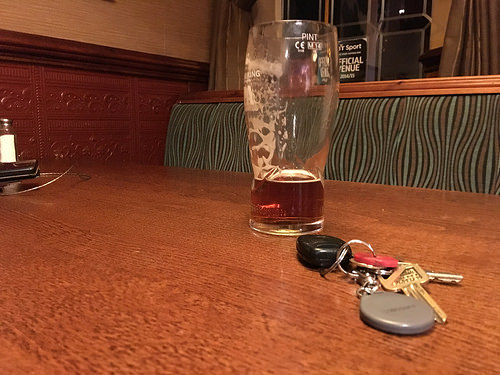 A conviction for Driving while Intoxicated (DWI) in New Jersey will result in the loss of your driving privileges in the Garden State, along with jail, fines, court costs and even a surcharge. Remember that unlike Pennsylvania, there is no ARD for first time DWI offenders in New Jersey. While New Jersey can’t take your license if you aren’t a resident of the State, it is a member of the Interstate Drivers License Compact as is Pennsylvania, New York, and Delaware.   Members of this compact report DWI/DUI to other members states so a DWI in New Jersey could also cost you your license in Pennsylvania! When most people think of DUI or DWI, they usually only think about getting behind the wheel of car after they’ve had too much to drink.   This, however, isn’t only way to get a DWI in the Garden State and surprisingly to many people, it doesn’t even involve driving!

In New Jersey, its violation of motor vehicle code to allow an intoxicated individual or a person under the influence of some drug or narcotic to drive your car. This is per se violation and the State (i.e. the Prosecution) only has to produce evidence so that a trier of fact (judge or jury) may reasonably infer, beyond a reasonable doubt, that the owner of the vehicle or car knew or reasonably should have known of the “permittee’s impaired condition to drive.”

To convict a person under NJSA 39:4-50(a), the State must produce evidence that would establish beyond a reasonable doubt, objective knowledge of impairment as opposed to subjective. This means that the test is what a reasonable person knew or should have known from the attendant circumstances. The test is not what the accused person actually knew regarding the intoxicated state of the person that was permitted to drive the car. This means that the prosecution can’t simply rely on the results of the Alcotest which showed the driver’s specific Blood Alcohol Concentration (BAC) or even the officer’s observations. In the case of State v. Skillman, the New Jersey Superior’s Appellate Division very clearly stated that it was not the intent of the New Jersey legislature to create a situation where a person could only allow another person to drive if this person passed some type of scientific chemical test (aka breath or blood test).   The State needs more than a BAC level over the legal limit of .08 and must use other forms of direct and circumstantial evidence of drunk or impaired driving.

Other forms of evidence for a conviction

Other forms of evidence that could cause a problem for any defense , could be the physical appearance of the driver along with the movement of the car prior to the traffic stop which resulted in the arrest.  Obviously, something like a car accident is going to present a major problem for any defense but your criminal defense lawyer shouldn’t necessarily concede that an accident is enough proof for a conviction. While the prosecution may attempt to use the results of field sobriety test in its case against an accused, remember that the evidentiary standard isn’t the objective knowledge of a police officer but rather a person who isn’t trained to detect cues of impairment. There are number of field sobriety tests (walk and turn, one leg stand, Horizontal Gaze Nystagmus (HGN)) and I encourage you to check out my article on them for more information. My free book on drunk driving is also a great way to learn more about these tests.   The prosecution is not only going to use the direct and circumstantial evidence surrounding the incident to convict someone of allowing offense but may even try to use silence. New Jersey courts, however, have held that an accused silence can’t be used against them for an allowing offense.

Similar to the offense of Driving While Intoxicated, New Jersey doesn’t permit plea bargaining for the Allowing Offense. The reasoning is that New Jersey views the Allowing Offense as equally egregious as the actual act of driving while impaired. This is the reason why a person who commits the Allowing Offense faces the same penalty of loss of license, jail, fines and court costs. The inability to plea bargain, however, doesn’t mean that prosecutors are just going to march off to trial in every case. It’s your criminal defense attorney job to show the weaknesses in a prosecutor’s case. Showing weakness will in many cases cause the prosecutor to consider alternative charges or amendments to the criminal complaint. While plea bargaining isn’t allowed, there is nothing to prevent the prosecutor from informing the court that the State will have trouble establishing its burden of proof at trial.

For more information of DWI in New Jersey and DUI in Pennsylvania, please keep reading my blog. I also encourage you to visit my free download section of the website. Remember the Allowing offense is just as serious as the normal DWI offense in New Jersey. Good luck with your case!