Theft by extortion for charity  Is it a crime if you dont get anything out of it?

Recently, a Philadelphia Police Officer allegedly coerced a man to purchase tickets to a charity event, “The Hero Thrill Show” which benefits the families of fallen Philadelphia police officers and Philadelphia firefighters.  The incident occurred during a traffic stop. 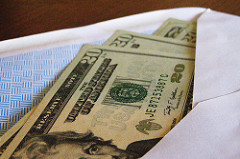 Police Chief Charles Ramsey described the conduct as extortion because the officer used his position of authority to obtain something—money for tickets to a charity event. While the officer’s heart may have been in the right place, the police commissioner is correct that the conduct was not only unprofessional but potentially criminal. Officer Zagursky, however, deserves the presumption of innocence, as do all people accused of a crime. There are no charges yet against this officer but the police department did suspend him for the conduct.

While ultimately, I don’t believe this Philadelphia police officer will be charged with any crime, there is probably enough evidence to do it. Extortion is a type of a theft offense in Pennsylvania. Like any theft offense, the gradation or the seriousness of the offense, is based on the value of the property taken. To obtain a conviction for extortion, the Philadelphia District Attorney would have to prove, beyond a reasonable doubt, that the officer intentionally obtained or withheld property of the person he stopped by seizing the person’s car under Philadelphia’s Live Stop Program.

If the officer was prosecuted for this incident, the charge would be a misdemeanor of the 3rd degree because the value of the ticket was under $50.00. If, however, the prosecution’s theory was that the officer’s intent was to take the person’s vehicle and obtain money for the tickets, the prosecution could charge a felony of the 3rd degree. Whether it’s a felony or a misdemeanor charge, some may argue that the officer conduct wasn’t criminal because he wasn’t receiving any benefit (money or the car) from the conduct. Achieving a benefit from the conduct is not an element of theft. The perpetrator doesn’t need to “get” anything from the act, he just needs to take or attempt to take something from another. In this situation, the officer’s good intentions, however, misguided, is not a defense to an extortion charge. If you have questions about the type of theft charges in Pennsylvania or New Jersey, give your law firm a call.