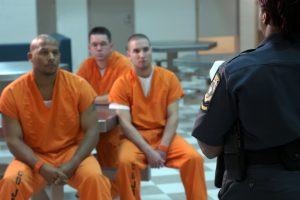 If a person was convicted the prosecuting attorney only needed to request that the court impose the mandatory minimum sentence if the court convicted the defendant of the specific offense. Pennsylvania permitted the court to do this despite the fact that the offense itself did not contain any language regarding a mandatory minimum sentence. Prosecutors relied on the sentencing code for a specific offense which allowed the court to impose the mandatory sentence. Prosecutors didn’t even have to satisfy that they had proven the conduct which triggered the mandatory sentence beyond a reasonable doubt. The law only required that they prove it by a “preponderance of the evidence”. In a gun case which involved drugs for instance a prosecutor would only have to prove that a person was guilty of each crime beyond a reasonable doubt, provide notice to the court of its intent to seek the mandatory minimum sentence, and establish by a preponderance of the evidence that they had complied with all of these prerequisites.

No matter what type of charges you are facing you need the help of an experienced Philadelphia, Pennsylvania defense attorney. Please click here to contact our criminal defense lawyers serving the Philadelphia, Bucks, Delaware & Montgomery County areas.