Homicide by Vehicle: Death and DUI Charges in Pennsylvania

In Pennsylvania, the crime of homicide by a vehicle while driving under the influence is defined in Title 75 § 3735. In that section any person who unintentionally causes the death of another person as the result of violating § 3802 (driving under the influence or controlled substances) and who is convicted of violating § 3802 is guilty of criminal homicide by vehicle. 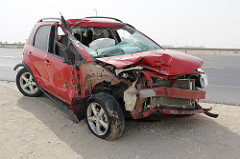 This crime is a felony of the second degree and carries with it a mandatory minimum three (3) year state prison sentence. That sentence is consecutive (one after the other) for each victim who was killed because of an incident.  Criminal homicide by DUI consists of three elements: 1) driving under the influence of alcohol or a controlled substance, 2) death of another person, 3) the death occurred as the result of the driving under the influence.

Criminal homicide by DUI requires that a person actually be convicted of DUI to be guilty of the more serious offense of homicide. If the person is not convicted he or she can’t be convicted of the homicide. § 3735, however, doesn’t require that the prosecution prove that the defendant had a particular blood alcohol content (BAC) at the time that he drove the car. The prosecution can meet its burden of proof through direct and circumstantial evidence such as witness testimony regarding observations of the driver before and after the incident and the testimony of accident reconstruction experts.  If you don’t understand direct and circumstantial evidence, read my previous article on this important topic.

While the prosecution isn’t required to prove the BAC level it must establish beyond a reasonable doubt a causal connection between the driver’s intoxication and the accident which resulted in death. In Pennsylvania an accused’s actions are the legal cause of death if they are the direct and substantial factor in bringing about it. In DUI homicide cases the most common types of evidence is eye witness testimony and a testimony of accident reconstruction experts.

The 3 Most Common Questions from 1st DUI time offenders in Pennsylvania Does it really start with the first drink? Impairment & DUI  Pennsylvania