While many of our readers frequently cross the bridge to and from New Jersey and Pennsylvania without giving it much thought it’s important to realize that these two jurisdictions have dramatically different laws regarding firearms. In Pennsylvania the term “firearm” is defined as follows. 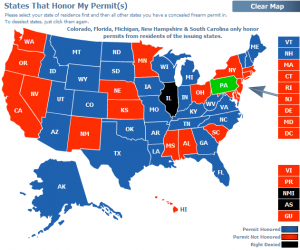 In the Commonwealth of Pennsylvania any person or dealer selling a handgun must sell it or transfer it through a licensed dealer or the county sheriff’s office. Further, any firearm transferred or sold through a licensed dealer (this includes handguns, rifles, and shot guns) is subject to an instant records check of their purchaser. There are no transfer requirements for the transfer of handguns between spouses, parents to children or between active law enforcement officers. There is also no transfer requirement for shotguns. Individuals within the Commonwealth of Pennsylvania are free to transfer these types of firearms without any license or documentation. Antique firearms are also exempt from these transfer and license requirements.

In State of New Jersey (aka “The Garden State”) the law is much different. It’s illegal to sell, give, transfer, or acquire any type of firearm, including a rifle or a shotgun, unless the buyer possesses a valid firearms purchase identification card and the seller signs a written certification identifying the purchaser. Unlike Pennsylvania, New Jersey requires a license to own a firearm of any type including antique firearms.

Finally, while Pennsylvania and New Jersey share a river, and 3 bridges, the sharing ends there. Similar to license to practice law, New Jersey doesn’t honor a Pennsylvania gun permit so if you cross over into New Jersey with any type of firearm, you are potentially committing a crime. If a lawyer wants to practice law in the Garden State, he/she needs to pass its bar exam and if you want to have firearm you need to meet New Jersey’s requirements. While Pennsylvania has some tough gun laws, New Jersey has even harsher penalties which include mandatory minimum prison sentences.

In closing, many people ask the difference between a Commonwealth and a State. There is no legal difference and the term “Commonwealth” on emphasizes that Pennsylvania’s state government is based on the common consent of the people. The term symbolizes its freedom from the former Monarchy (i.e. Great Britain & King George). There are only 3 other states who make this distinction–Kentucky, Massachusetts and Virginia.