College Hazing Can Be A Criminal Defense

There are clear advantages for student who choose to make “Greek Life” a part of their college experience despite criticisms from some who believes that it diverts a student’s focus and hinders academic performance. 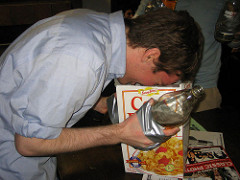 These fraternities and sororities offer students a network of friends while in school and connections that last a lifetime. Even respected publications like Forbes magazine believe it’s a smart move. It is estimated that as many as 9 million students across the country join these organization each year.

Individuals who have gone to have exceptional professional careers in the military, law, medicine and politics often cite their fraternity and sorority experience as memorable. Many often still refer to their “brothers or sisters” as positive influences in their lives. Allegedly only 3 US presidents haven’t been members of fraternities. In addition to networking, these groups often help college student hone and develop organizational, management and interpersonal skills. These are especially important in today’s world of social media and text messages often hinder face to face communications.

Despite the benefits of these groups, the “pledge” process remains a tradition. While many may believe that forcing an individual to perform task or acts is perfectly acceptable, Pennsylvania, along with other states has placed limits on what is permissible and legal. While a college or University can obviously suspend or even expel a student who takes the “pledging” or process too far, hazing is actually a crime. In Pennsylvania, hazing, a misdemeanor of the 3rd degree, is defined as “any action or situation which recklessly or intentionally endangers the mental or physical health or safety of a student or which willfully destroys or removes public or private property for the purpose of initiation or admission into or affiliation with, or as a condition for continued membership in, any organization operating under the sanction of or recognized as an organization by an institution of higher
education.” 24 Pa.C.S. §5351.

In addition, Pennsylvania requires each college or university to provide or adopt a program for the enforcement of the Commonwealth’s anti-hazing law. The State permits such penalties to include fines, the withholding of diplomas or transcripts, imposition of probation, suspension or dismissal from the school.

Criminal charges, however, unlike University sanctions can potentially follow a student for the rest of his life. Remember, you can’t expunge a misdemeanor conviction in Pennsylvania. While hazing isn’t a felony charge, it is much more serious than a summary offense like underage drinking or disorderly conduct. Further, hazing can just be one of many charges against a student. For example, recently the Monroe county district attorney’s office charged the first of 5 of 37 former fraternity members from Baruch College in the hazing death of a New York City freshman fraternity pledge. A Pennsylvania grand jury found sufficient evidence for criminal charges, which included third-degree murder, involuntary manslaughter and aggravated assault in addition to hazing.

While this is an extreme case, it demonstrates that hazing isn’t limited to misdemeanor charges. Even if the student isn’t charged with a felony, a criminal record of any kind can seriously limit a young person’s option later in life. If you have questions about hazing, or any criminal issues give our office a call. You may also want read my book or watch one of my 30 videos.